Veldman Group is your partner for everything related to your stable, for pig, poultry, cattle, horse, sheep, rabbit, and goat stables.

The formation and history of the Veldman Group: Veldman Bouw, Veldman Techniek, Veldmaz and VeMa Trading

In 1987 Hennie started trading in construction materials and PVC from the farm in Luttenberg.

After Hennie moved to Dalfsen in 1992, several renovations of the existing stables were realized. The trade in materials expanded significantly and so the question arose from people from the surrounding area whether these renovations could also be executed for third parties.

The administration was executed by Paulien from the beginning.

The first employees were hired in 1997 for the construction of a new meat pigs stable in Dalfsen. Jos Veldman was the executor for this build. He decided to quit his job and join the family business. André joined the business because of his wide knowledge of parts and materials.

After having exectued several construction and installation projects with a small amount of people and two people at the office, FMD broke out in 2001. It was not allowed anymore to have third parties working at the farms in Dalfsen and Luttenberg and the activities were continued in Raalte on Zompstraat 17.

We had access to a much larger warehouse here and slowly expanded the activities to about all disciplines present in the agricultural sector. The amount of employees grew along steadily, both in the office and in the field, as well as the vehicle fleet and machinery.

Finally, the secondment department came into existence as a result of positive experiences with Polish employees. They are an important part of the organization to this day.

The offices moved to our new building on Zompstraat 19 in 2008. The warehouse remained at Zompstraat 17, as of 2014 under the name Vema Trading BV.

The developments do not stand still, we keep on renewing and improving ourselves and keep on looking forward to new possibilities; including the form of energy technology. 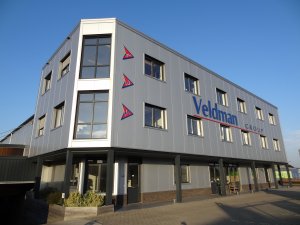